The universe rumbles, the earth vibrates, and nobody takes off.

The characters in this play are hopeless, sometimes even mean and nasty, but they try to do things, great things, out of sheer naiveté, pleasantly stupidly, to usher in a time when nobody does things anymore, especially not the talented and privileged, who at some point are eaten up by foam and the internet.

A subversively epochal and perversely dumb text without age restrictions but only for people who are prepared to confront the world’s overload and who can stop selling their grandmothers. 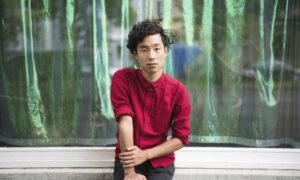 Born in Berlin in 1987 and raised in Berlin, Korea and Paris, Bonn Park studied Slavic languages and literature at Humboldt University Berlin from 2008 on.

His first works as a director and author were for the Berlin Volksbühne. He has been guest director at the Zurich Hochschule der Künste (ZHdK) and guest student of Werner Schroeter, Heiko Kalmbach and Frank Castorf. In 2011 he took up a course in dramatic writing at the Universität der Künste Berlin.

He received the Heidelberg Stückemarkt’s 2011 Innovation Prize for Die Leiden des Jungen Super Mario in 2D. His play Traurigkeit & Melancholie oder der aller aller einsamste George aller aller Zeiten was awarded the Else Lasker-Schüler Playwright Prize 2014 and nominated for the German Youth Theatre Prize 2016. The premiere took place in 2015 in Bonn, directed by Mina Salehpour. The audio play of the same name was produced in 2015 by Deutschlandradio Kultur. In 2016 he won the Essen Autorentage youth jury prize for Wir trauern um Bonn Park.

Das Knurren der Milchstraße was awarded 1st prize at the Berlin Theatertreffen Stückemarkt in 2017, including a commission from the Badische Staatstheater Karlsruhe. The play was premiered at Theater Bielefeld in September 2017, directed by Bonn Park himself.

With the suport of:

Share
You may be interested in
Discussion/Chat
Post-Function Colloquium with the artistic team of ‘El rugit de la Via Làctia’
Show
L’alegria
by Marilia Samper
Show
Pluja
by Guillem Albà and Clara Peya
Show
El chico de la última fila
by Juan Mayorga
This site uses cookies own platform to gather information to help optimize your visit to the website, click here for more information.
Accept